Does your personality affect the way you dress?
Posted on January 28, 2019 by Toni Carver

What we wear sends out a message to people we meet. Consciously or otherwise, we make a visual statement about how we feel in what we wear.

How much do our own preferences have towards others?

I recently took to Facebook to ask my friends their opinion. Which shoes did they think I should go with for an event I had the following day. I posted two pictures with my outfit laid out including necklace and a pair of shoes. 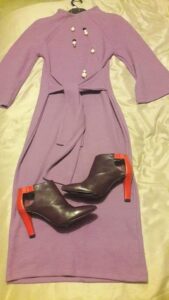 The dress was new and bought from Marks & Spencer. Both pairs of shoes I already had and had shopped from my existing wardrobe. (I do believe that you can combine outfits together from your existing wardrobe without having to buy everything new. If you want to learn more about this, get in touch to book a session).

I already had a good idea about which shoes I thought I would wear before the votes came in but I was curious to see what people thought.

I chose shoes number one

Are you wondering why? It’s not because I don’t like the other shoes because in actual fact, they are one of my favourites. They are a pair that I have had for many years, been resoled and heeled and the £s per wear I’ve had must be almost pennies now. Getting your wear out of things is a must when buying certain items of clothing.

Instead, it was about the overall image I wanted to project and, make an impression wearing them. I guess it’s linked to confidence too and how I felt wearing them. I felt I needed an edge and these shoes gave me the edge I wanted. How many times do you choose something to wear because you’re happy or confident? This is a must I would say!

The comments I got from my friends and the votes made me reflect about how much our own personality impact on our view about what others wear. I’ve said it many times – image matters, whether we like it or not. How many times have you seen someone on TV or on social media and passed comment about what they are wearing? We all do it – good and bad.

There was also a distinct difference in styling and personality in each shoe. One pair was quite edgy and bold. The other a more classic pair. Also, from the pictures, it can be hard to judge can’t it? There were a few who saw black and red for shoes number one for example when in actual fact they were purple and red. Were people saying what they thought I would look good in, or were they actually saying what they thought they would wear themselves? I suspect there was an element of both.

In my personal and professional view, both shoes worked. If a client had posed the same question to me and asked for my opinion, I’d have asked them to think about where they were going, what impression they wanted to create and, how comfortable were they to wear. I think there’s nothing worse than being in a pair of shoes which are killing your feet!

Did I get any comments about my shoes at the event? Interestingly, no. But I did about the dress – the colour looked great on me I was told 😉.

Bringing it all together

This backs up why the colour clothes we wear have such an impact. It’s usually the first thing people see and it’s actually the easiest way to update your look too. Arguably, you can dress as a different personality and many people do – they have to dress a certain way for work and when out of work, they are the opposite. However, it’s your personality which dictates how you actually combine your outfits together, or not for some of you!

Either way, I would always recommend that you dress for your body shape and wear the shades of colour which suit your colouring the best near to your face as you can see I have.

Get in touch to learn more and to book your session.